The Union Chain Bridge (or what’s left of it!) is looking particularly picturesque in this month’s update from site. Following the removal of the wire ropes in January, work has begun on dismantling the bridge deck.

The Spencer Group are using a platform suspended from the aerial ropeway to remove the deck from the English side to the Scottish side. Around half of the deck has been removed which makes for some extraordinary drone footage.

Click on the image below to see the previous update from site. 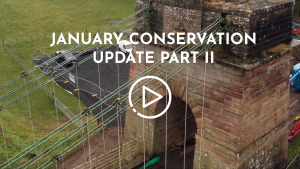