A symbolic stage has been reached on the conservation of the Union Chain Bridge – with the physical connection between England and Scotland being cut at the site for the first time in centuries.

Removal of the bridge’s deck is complete and now work is starting on the final stage of its disassembly – to take down the main chains of the bridge which supported the deck.

The 12 chains, which in total are around 2,000 metres long, will be taken down over the course of six weeks, leaving nothing but the River Tweed separating the two countries.

The painstaking work to refurbish the bridge will then begin as it slowly starts to take shape again.

Click on the image below to see the previous update from site. 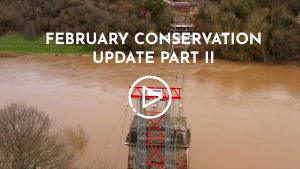