The 1820 Union Chain Bridge unites nations, communities, and specifically the parishes of Hutton in Scotland, and Horncliffe, in England.

Bearing the motto Vis Unita Fortior (“United, Strength is Stronger”), the bridge was designed and built during the backdrop of the Peterloo Massacre in Manchester, in 1819, and the Radical Wars in Scotland, in 1820. This was a period of social and political unrest, when workers were demanding fair working hours, minimum wages, and parliamentary reform. The changes wrought by the revolution in this period were profound: electoral reform was eventually made and the term “radical” entered the political lexicon. Perhaps this is typical of a region which, historically, was infamous for clan rule, lawlessness, and an independence of spirit. 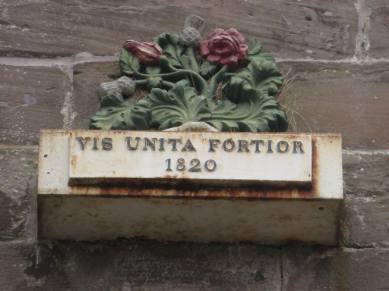 In 1707, the parliamentary Act of Union formally united the kingdoms of England and Scotland as one state, although, the two neighbouring states had in fact been united by the Stuart monarchy since 1603, when King James VI of Scotland inherited the throne from his double first cousin twice removed, Queen Elizabeth I of England.

The Union Chain Bridge’s inscription refers to its special cross-border status, and that of its two neighbouring communities, with its Latin motto Vis Unita Fortior (“United, Strength is Stronger”). This is accompanied by the evocative insignia of entwined thistles and Tudor roses, the respective emblems of each nation. The actual border divides the river and is marked on the bridge at the half-way point. Borders are, of course, human interventions and the boundaries are not always meaningful to the communities that live there.

The region is historically known for the presence of Border Reivers, or raiders, families who made a living as sheep stealers and horse thieves moving across the border as if it didn’t exist. The reiver clans and their raids were a feature of life here from around the 13th century to the 17th. In some accounts, during feuds between England and Scotland, Border Reivers were recruited as mercenaries, fighting for whichever side paid them. However, at the Battle of Pinkie Cleugh in 1547, an observer, William Patten, noticed Scottish and English borderers chatting with each other, then putting on a spirited show of combat once they knew they had been spotted. The heads of state of both countries found the reivers, and the borderlands generally, difficult to control and those borderers appointed to offices of state often had entirely their own agenda, namely the advancement of their own family. Further muddying the cross-border waters, clans often intermarried and were dependent on one another for work and a social life.

Map of Berwickshire by Joan Blaeu and Timothy Pont, 1654. © Alamy 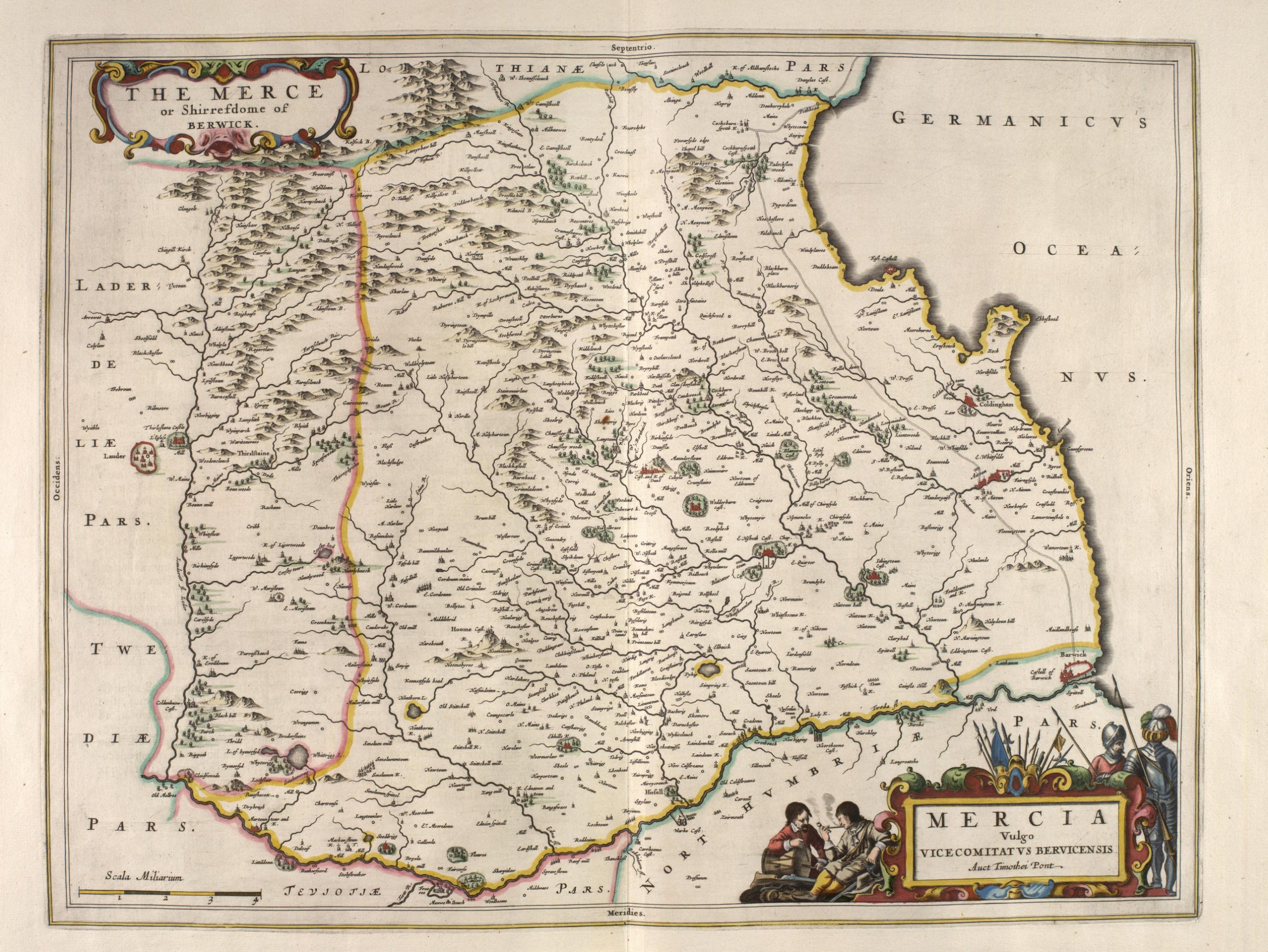 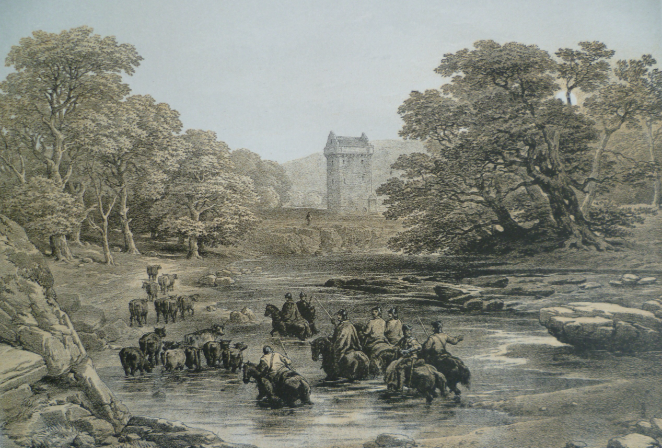 The year was a tumultuous one and George was not a popular king. George introduced the ‘Pains and Penalties Bill’, allowing him to divorce his wife Caroline of Brunswick and deny her the role of Queen, which enraged many of his subjects who liked her a lot better.

The year 1820 was also one of exploration, discovery and mass movements. Europeans first set foot on the continent of Antarctica, and HMS Beagle – the ship that scientist Charles Darwin later sailed on his voyage of scientific discovery – was launched. The first organised emigration of freed slaves left America for Africa: the slave trade was abolished in 1807 but slavery was legal in British dominions until 1833.

The ‘Cato Street Conspiracy’, a plot to kill the entire Cabinet, was foiled early that year, and 1819’s Peterloo Massacre in Manchester had fanned the flames of social and political turmoil. 15 people were killed and over 400 injured by soldiers sent in by the government to quell a peaceful protest in St. Peter’s Fields, and the Manchester Observer newspaper coined “Peterloo” in reference to the recent bloody Battle of Waterloo. Scottish people marched in their defence. 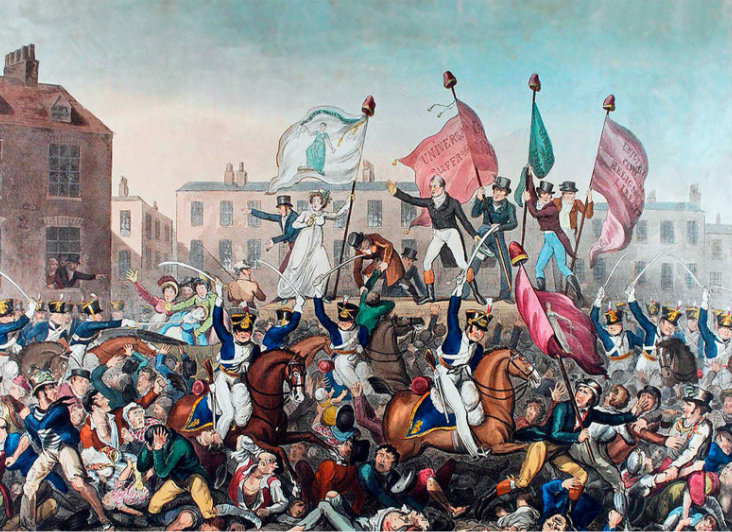 The French Revolution of 1789 politicised many people and workers started to co-operate to press for better wages, working and living conditions.

Many educated and prominent people, including the engineer Thomas Telford, sympathised with the aims of the French Revolution. However, there was a sense of exhaustion after a long series of military conflicts, starting with the French Revolutionary Wars that lasted from 1792 to 1802, until the defeat of Napoleon at Waterloo in 1815. The huge cost of funding these wars led to economic instability and unemployment. Trade unions had started up to protect workers and their families from both unscrupulous employers and dangerous working conditions, although these were illegal until 1824 so had deliberately obfuscatory names at first. Long working hours, over-crowding, poor sanitation and other factors caused mass ill health: the first public health officer was not appointed until 1840. 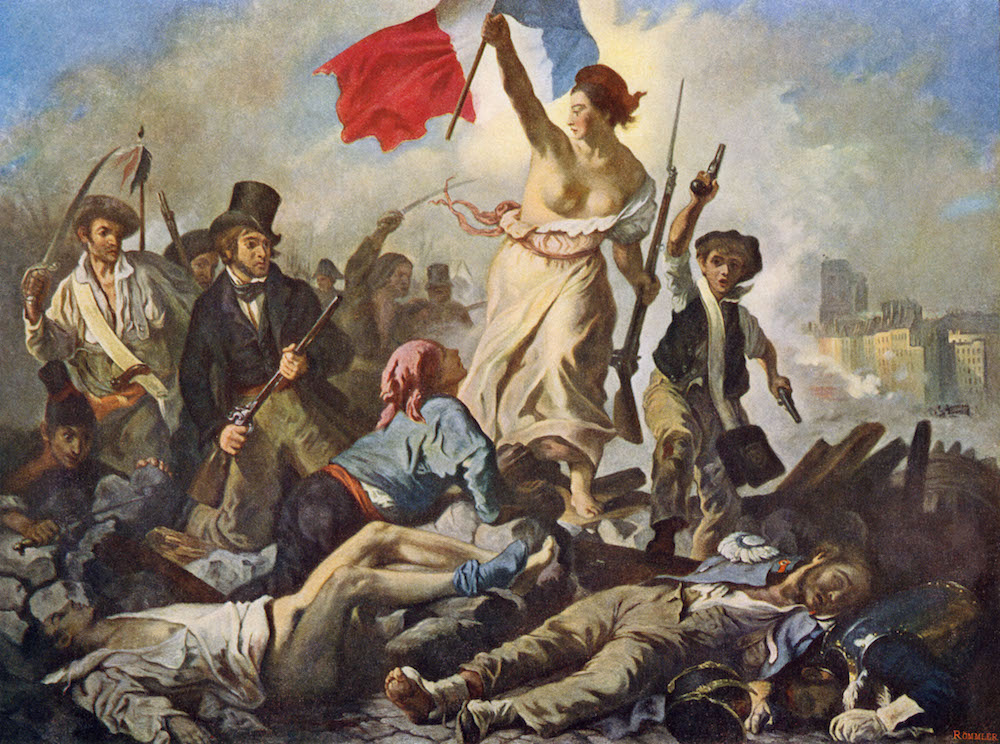 As well as bringing benefits, engineering innovations and industrialisation also led to a dramatic increase in child labour. In rural areas such as Berwickshire much younger children had always worked in the fields, but children became even more exploited.

They worked ten-hour days and were often killed or injured in the dangerous working conditions. The twelve-year old Charles Dickens, for example, started work in a shoe polish factory in 1823. The starting age for children working in mines was not raised from three to ten years until 1842.

Children working in a narrow coal seam, from a report of 1842. © Alamy 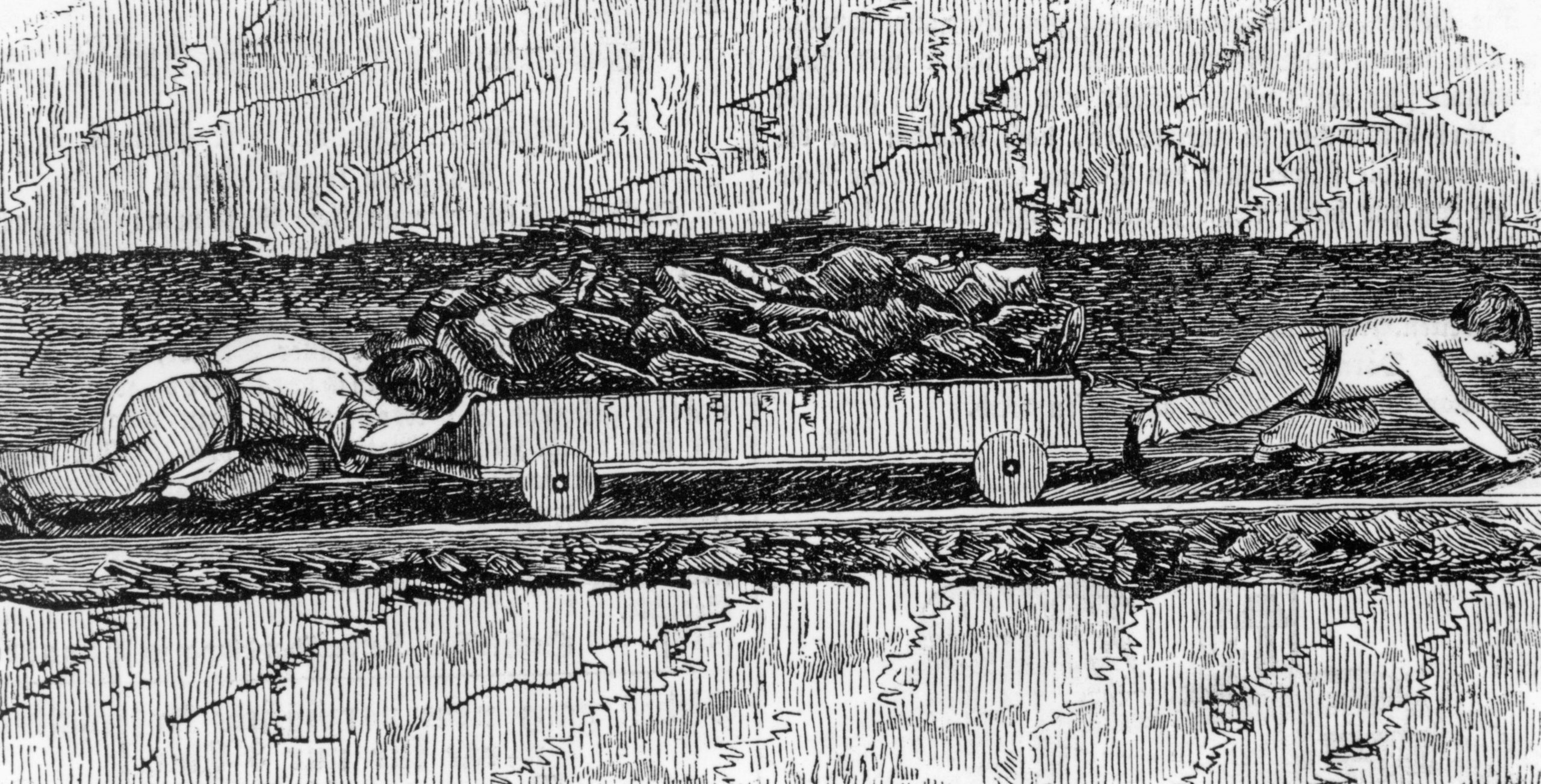 In Scotland, there had been many upheavals and expressions of dissent throughout the 18th century.

Inventions such as the steam engine and the Spinning Jenny had revolutionised industry in the late 18th century, but both Scotland and England were still mostly rural and agricultural when Brown was planning his bridge.

Weaving was also an important source of work in Scotland. The number of Scottish weavers between 1780 and 1820 increased from 25,000 to 78,000, which pushed wages down at the same time as food prices were rising, because of the effect of the Corn Laws. In the late 18th century, weavers usually worked on their own looms at home, and thus had a degree of autonomy over their working lives and conditions. However, the introduction of machine looms from the early years of the 19th century led to workers’ taking factory jobs, and wage cuts.

The Fenwick Weavers’ Society was an early co-operative movement in Scotland and the General Association of Operative Weavers in Scotland was one of the first trade unions and working-class movements set up in 1808, with demands for fair working hours and minimum wages. Scotland had one of the highest literacy rates in the world at this time but ordinary people in neither Scotland nor England had the vote. There were strikes when their demands were rejected by mill owners.

Hand weaving illustration, one of a series by Hogarth, 1747. © Alamy 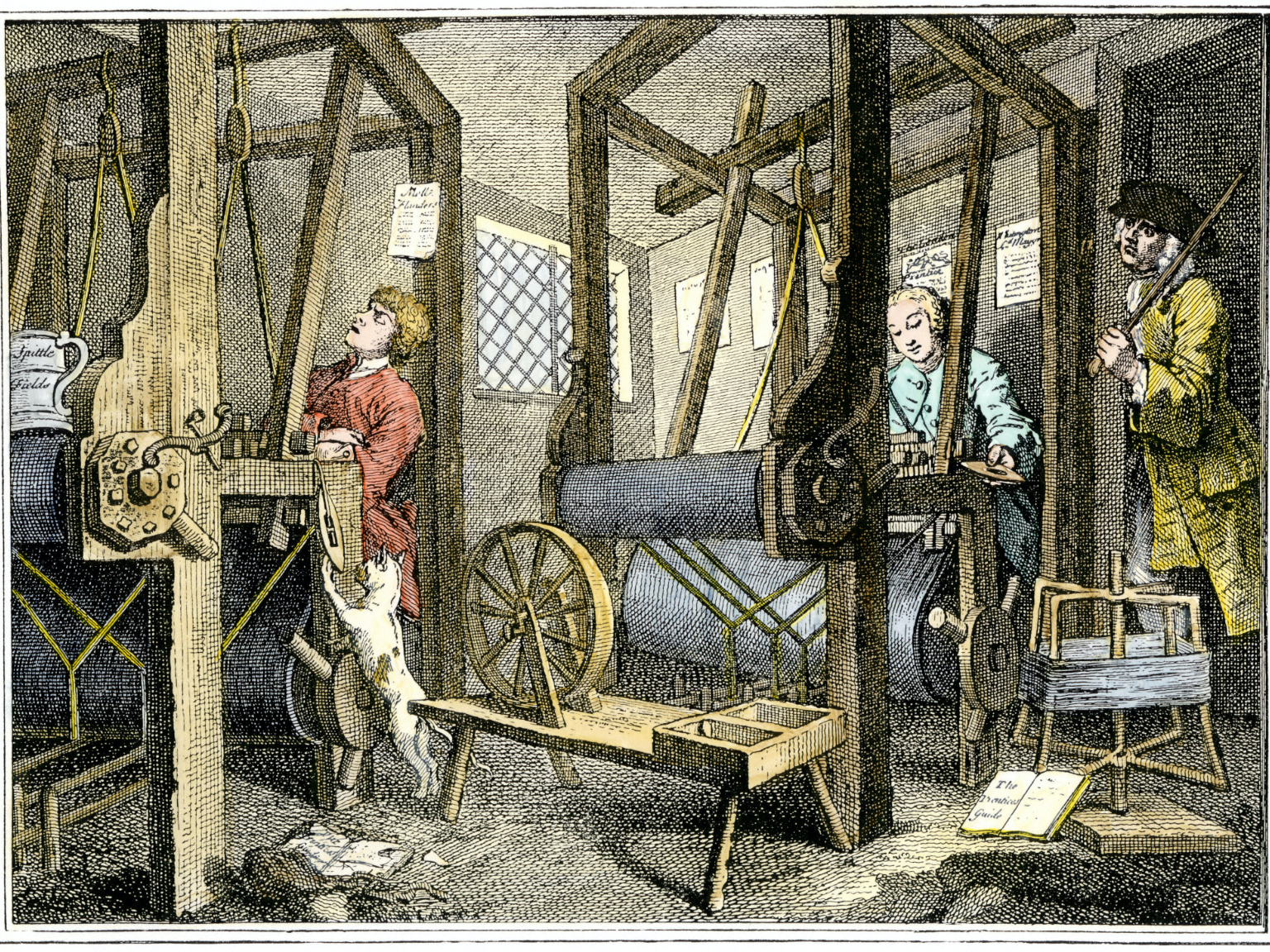 With the price of grain kept high by the Corn Laws introduced in 1815, heavy taxation, a bad harvest, and draconian measures to repress any dissent people were pushed to their limits.

In 1816, the social reformer William Cobbett spoke at the biggest political meeting in Scotland’s history in Glasgow and, by 1820, tensions were sufficiently high that 60,000 workers went on strike in and around the city. At Greenock, as at Peterloo, the yeomanry was called in and shots were fired at the crowds, killing several people. At Strathaven in Lanarkshire and in nearby Paisley and Johnstone, where many weavers made the popular Paisley shawls, rioting and running battles lasted for several days. 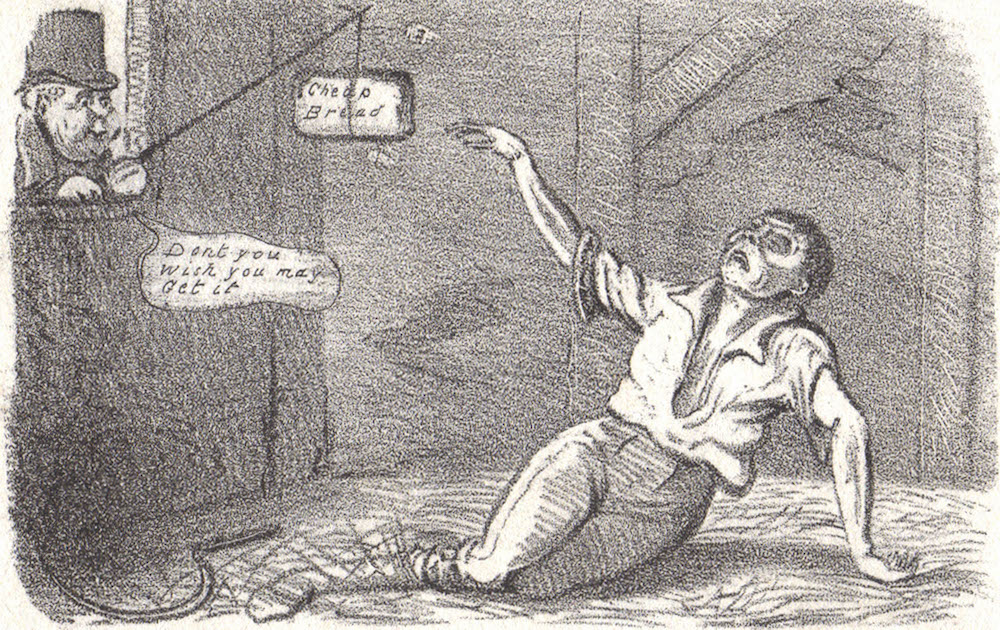 What became known as the Radical Wars or the Scottish Insurrection was a short-lived working-class mobilisation that led to its leaders being arrested, transported, and in three cases, hanged.

The subsequent changes wrought by this political revolution were profound. With further public pressure, electoral reforms were gradually made; the 1832 Representation of the People Act, often known as the First Reform Act, was passed despite significant opposition in the Houses of Parliament, particularly in the House of Lords. This removed seats from the “rotten boroughs”, those with a small number of electors and thus subject to the whim of wealthy local landowners and extended the vote to include the new industrial cities which had grown as a result of the Industrial Revolution. Significantly increasing the number of the male voters, it was the first in a series of Reform Acts which eventually led to more universal suffrage. Scotland passed a separate Reform Act in the same year which hugely increased the electorate and returned more Scottish MPs to parliament. 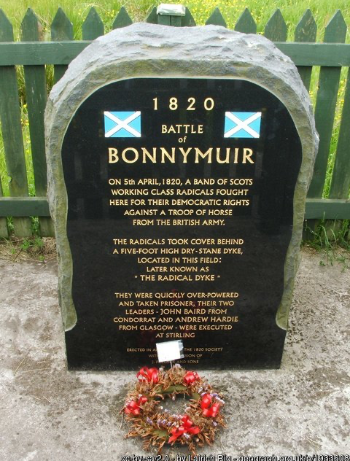 Names of the killed and wounded at Greenock, University of Glasgow 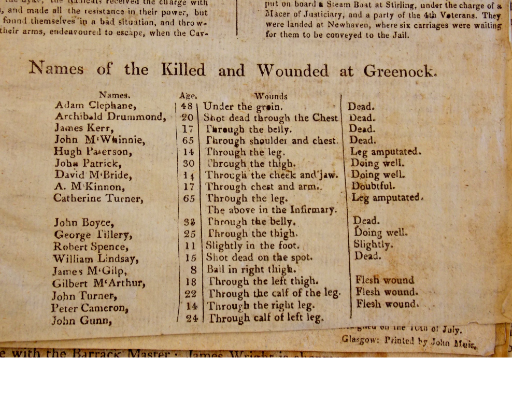