Bridge Story > Need for the Bridge

Need for the Bridge

At the time the Union Chain Bridge was built, the Industrial Revolution was starting to make its mark on the landscape and people's lives. The local demand for moving mined and manufactured goods was growing; many fishermen and agricultural workers needed to transport their goods and animals.

Before 1820, crossing the Tweed at this locality involved using either a tide-dependent ford or making a long round-trip to Berwick or Coldstream. To ease this burden and to connect the communities either side of the river, the Union Chain Bridge was built by The Berwick and North Durham Turnpike Trust in 1820. At the time, it was the first suspension bridge in Europe to carry wheeled traffic, and it remains the oldest vehicular suspension bridge still in use worldwide.

The bridge spans the River Tweed between the parishes of Horncliffe, in England, and Hutton, in Scotland. Today the riverside is a serene and picturesque landscape, but two hundred years ago it was much busier.

The two communities – Berwickshire on the Scottish side, and North Durham on the English side – still had a largely rural way of life, but the demand on both sides of the river for coal and lime, and manufactured goods, was growing. The river was also an important source of fish, and many fishing communities as well as agricultural workers lived in the surrounding villages.

At the turn of the 19th century, sailing ships and boats of all shapes and sizes were the main way people and goods were moved on water. On land, goods were still transported by road, on horse-drawn carts and wagons, which could mean a round trip of over 10 miles for travellers and traders wanting to cross the River Tweed safely. Contemporary maps, such as John Blackadder’s 1797 map of the Scottish county of Berwickshire, show the old toll and turnpike roads as well as the distances to the available bridges at the English town of Berwick on the east coast, or further west at Coldstream on the Scottish side of the border.

There were alternative but more difficult, and sometimes dangerous, crossings by ford nearby at different times in history. In the early 1800s the Tweed was fordable at New Water Ford, close to where the Union Chain Bridge would be built, but it was prone to flooding. With skill and local knowledge, people and loaded wagons could cross at low tide, but as traffic on the river increased, the fords became more difficult to negotiate.

Map of Berwickshire by John Blackadder, 1797. © National Library of Scotland 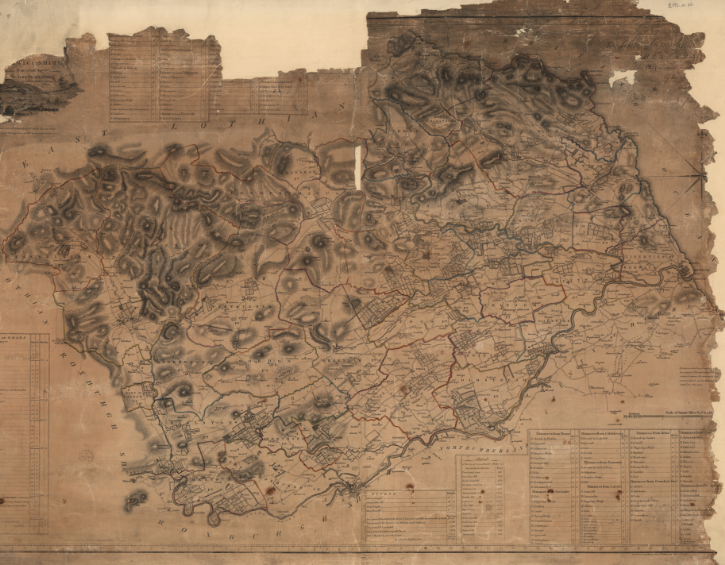 The earth’s resources were being mined and used in manufacturing to power the Industrial Revolution, but road building and maintenance had lagged behind industrial growth, and the roads that did exist were often in a poor state of repair.

There were no railways yet – the Tweedmouth-Sprouston line did not open until 1849 - and the road network grew organically as local entrepreneurs saw the need, rather than as a coherent national road system.

The Turnpike Act of 1707 allowed turnpike trusts to be created to build roads as and when landowners saw the need. There were over 2,000 miles (3,200 km) of turnpike roads built in Scotland between 1790 and 1810. A turnpike road was one where a toll or payment was collected at a tollgate or tollhouse, many of which can still be seen on old roads and byways. The term turnpike refers to the military practice of placing a pikestaff across a road to block and control passage. As such, sometimes there was a physical barrier to stop people passing without paying, as, then and now, there were plenty of fare dodgers!

A bridge to speed up crossing times over this part of the Tweed had been discussed since 1802, but it wasn’t until 1819 that an Act of Parliament paved the way for the bridge’s construction. The bridge was paid for by local landowners and investors, and work started in August 1819. Local men from both the Scottish and English communities with the necessary skills were employed in the building work.

The Berwick and North Durham Turnpike Trust raised £7,700 to build the bridge, which is about the equivalent of £750,000 in 2020. To recoup this cost, tolls were collected at a small purpose-built house on the either side of the bridge and this system remained in place until 1883 when the Union Chain Bridge toll ended. The tolls were used for the upkeep of the roads but as railways became more widespread in the second half of the nineteenth century, turnpike roads became less economically viable. The following year the Tweed Bridges Trust became the new custodians of the bridge.

Map of Berwickshire by John Thomson, 1821. © National Library of Scotland 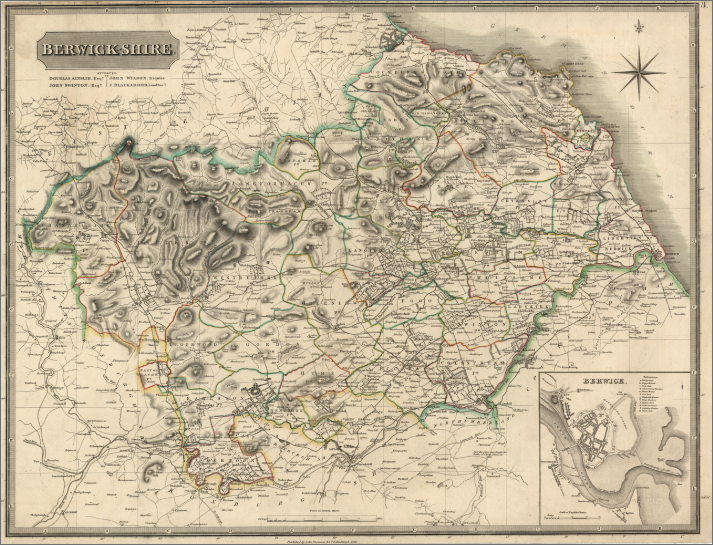 A tollhouse was built on each side of the bridge. On the Scottish side, the tollhouse still stands. Now known as Tweed Cottage, it was used by the local community in a variety of ways.

It held a liquor licence for the sale of whisky until 1854 and it was also a Marriage House until 1857. Although the 1707 Act of Union united England and Scotland constitutionally, its legal systems remained separate – including the marriage laws. In England, parental permission was required if you wanted to marry at under 21 years of age, but in Scotland you could marry by declaration in a ‘handfasting’ ceremony that required only two witnesses. Gretna Green is the most famous place for runaway weddings, but anywhere in Scotland was legal.

The tollkeeper’s cottage on the English side of the bridge was known as ‘Union Bridge Toll’. The 1841 census records a George Aynsley, born in 1813, with his sisters Margaret, aged 31 and Elizabeth aged 20, as living there. Margaret would have been 10 years old and George 7 when the bridge was built. In 1861 the toll collector was recorded as Ann Pringle, aged 30, who lived with her sister Catherine, a dressmaker aged 23 and brother George, 25, a road contractor.

After tolls were abolished on the bridge in 1883, the English cottage remained occupied, sometimes rent-free in return for the tenant’s basic maintenance of the bridge. This was not such a good deal as one might imagine: as the cottage was built into the rock face, there was no running water inside but there was a great deal of damp. It was criticised as not suitable for occupancy in a report by a local Sanitary Inspector in 1937, but the tenant, Thomas Cockburn and his family, continued to live there until 1943. Making it a safe and healthy place to live was too expensive, so the decision was made to demolish it, and this was done in the early 1950’s.

The Roxburgh family outside of their home, the English Tollhouse at the Union Chain Bridge, c. 1900. © Alamy 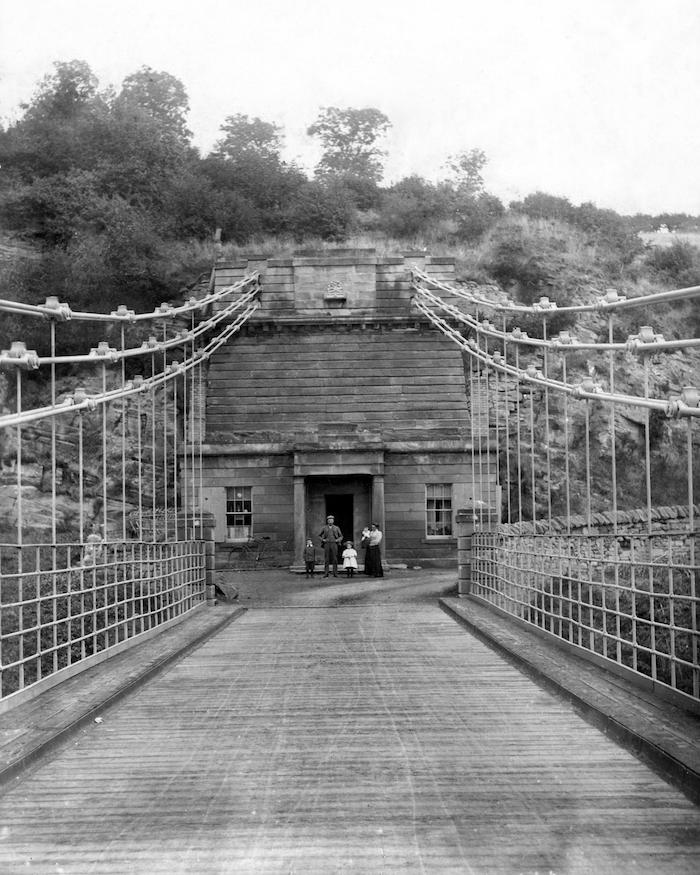