Captain Samuel Brown, or Sam Brown, as he liked to be called, was a British Royal Navy officer who designed innovative cables for ships made from iron chains.

His factories making these chains were so successful that he became the sole supplier of iron chains to the Navy for a century. He applied his new ideas to civil engineering and, in 1818-19, proposed a suspension bridge design over the River Tweed, which included the use of another of his innovations: wrought-iron eye-bar chains and links. Brown’s design was chosen, it being noted that his bars and links were “very superior” to the competitors’. The Union Chain Bridge opened on 26th July 1820, after taking less than a year to build. The pioneering suspension engineering meant that the total cost of the build was £7,700 – about one third of the cost of a stone bridge and four times longer than would have been practicable as a single span in stone. Thomas Telford used Brown’s ideas for his famous Menai Straits Bridge and Brown’s design influenced the likes of Isambard Kingdom Brunel, designer of the Clifton Suspension Bridge. Brown’s patented iron chain link designs were soon taken up for bridges the world over.

Despite its innovative iron chain link system, the Union Chain Bridge is not as well-known as it deserves to be, perhaps because it was not designed by a famous engineer.

Sam Brown was a naval officer who had served as a young sailor in the Napoleonic Wars in the 1790s. He was born in London in 1776, but his mother was from Roxburgh in Northumberland and his father was from Borland in Galloway, so he may have retained local links.

Sam Brown was not a trained engineer, but he was an experienced amateur, and he was very interested in exploring the new possibilities that construction with refined iron allowed. The contemporary advances in the understanding of metallurgy at the time and applied mathematics meant that stronger and longer bridges could be built. Brown was not expert in the mathematics and mechanics of materials and how they worked, but was more of a ‘hands-on’ engineer, experimenting with new materials and techniques.
He corresponded and worked with many of the famous engineers of the day, sharing knowledge and collaborating, but also competing (and sometimes falling out) in the race to build more quickly. At the time, bridge-building was not a distinct discipline and many engineers of the day, including Thomas Telford, John Rennie and his son, also called John Rennie, James Watt, Robert Stevenson, George Stephenson and his son Robert Stephenson, Marc Brunel and his son Isambard Kingdom Brunel, designed bridges as well as roads, canals, ships, docks, harbours, lighthouses, railways, aqueducts and many other structures.

In his naval career, Sam Brown rose through the ranks finally serving as Commander from 1811 until his retirement, when he accepted the title of retired captain, leaving him free to pursue his business and engineering interests. In 1805 he took part in the capture of a French frigate while a lieutenant on HMS Phoenix (a ship that Jane Austen’s brother Charles later commanded and unfortunately scuppered). He never lost his love of the sea; the grand hall in his home at Netherbyres in Eyemouth was built in the shape of the bow of a ship. He was knighted in 1835 and later moved back to Blackheath, London, where he died in 1852. 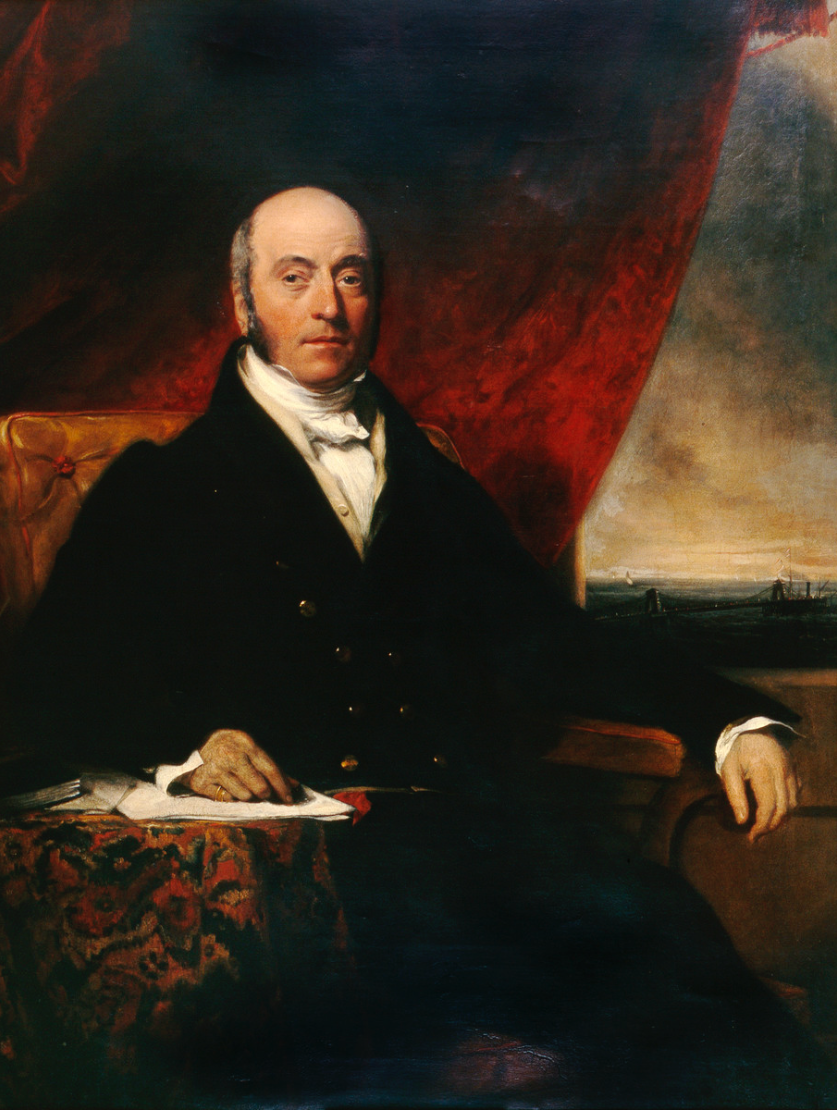 H.M.S. Phoenix, on which Sam Brown served, in chase of the ‘Didon’, painted by Nicholas Pocock in 1808 © Royal Museums Greenwich 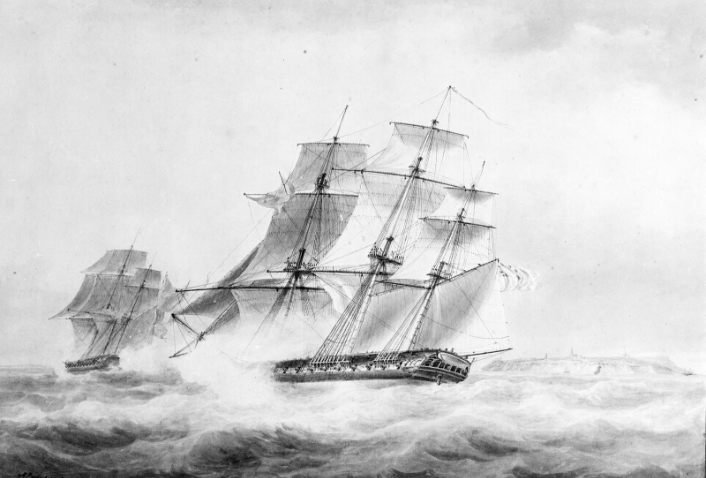 Brown was fascinated by the technological developments of the Industrial Revolution in the early years of the nineteenth century, and at the age of 30, he started designing wrought iron chains that would provide a stronger and longer-lasting type of marine cable than hemp ropes.

The Admiralty tested his design on several ships as anchor cables and rigging. In 1806, he patented the system that joined iron shackles and swivels to make a twisted link chain.

In 1812, he founded an ironworks with his cousin Samuel Lenox Brown at Millwall on the Isle of Dogs, directly across the River Thames from the Deptford naval dockyard. This was one of the first industrial buildings in the area, which was to become a hub of British maritime commerce. Here, he tested out his iron chains for ships’ rigging, mooring and launching lines, and in 1816 he was the first to test chain cables with a hydraulic testing machine. The huge chains, twice the size of a human head but made on the same principle as chains worn round the neck, can be seen in the famous photograph of Isambard Kingdom Brunel. That same year he opened a second factory, initially named the Brown Lenox Chain and Anchor Works, later the Newbridge Chain and Anchor Works, at Pontypridd, Wales. This location was chosen because it was near the Welsh coalfields, a good source of iron ore, as well as the canal network.

As his reputation for quality products grew, the commissions followed. Isambard Kingdom Brunel commissioned the Brown Lenox Ironworks to make the chains for the SS Great Eastern, an iron-hulled steamship and the largest ever built at the time of her launch in 1858. The Pontypridd factory continued to supply chains and anchors to the Royal Navy for a century, supplying ironwork for warships until the middle of the First World War. The chains for the Union Chain Bridge were probably also made here: they were described as having been made from “the best Welsh iron.”

The chains for the Union Chain Bridge are another Sam Brown invention, patented in 1817. Unlike those he supplied to the Navy they are made of iron bars, rather than chain loops. These bars link together with eye-bars, which keep the long bars in parallel, and provide a saddle bearing that secures a suspension rod vertical to the catenary chains.

A piece of one of the first chain cables to be used by the Royal Navy. Made by Brown Lenox & Co, c. 1808 © Pontypridd Museum.

Back in Northumberland, the turnpike trustees were looking for the best design for the new bridge to cross the Tweed. They had appointed the famous engineer John Rennie as consulting engineer.

There were two designs under consideration. One was by Robert Flinn of North Shields, North Tyneside, the other by Sam Brown. Despite his inexperience and amateur status, Brown’s design was chosen by Rennie, who wrote to William Molle, chairman of the trustees, noting how Brown’s bar link chains were “very superior.”

Rennie refined Brown’s design, advocating clean and rather monumental Egyptian Revival lines for the masonry piers, a style that had become popular after Napoleon’s conquest of Egypt in 1798. The pylon on the Scottish side of the bridge is the earliest standing road suspension bridge masonry pylon in the world.

Brown came from an amateur engineering background and was willing to experiment with new innovations and technology. His patented inventions had a huge impact on bridge design, influencing many engineers including Isambard Kingdom Brunel, designer of the Clifton Suspension Bridge in Bristol. The new iron chain suspension bridge technology, pioneered on the Union Chain Bridge, led to other engineers’ designing bridges that could span larger widths at a fraction of the cost of more traditional construction techniques, and in places that were previously too difficult or dangerous for construction workers to access. 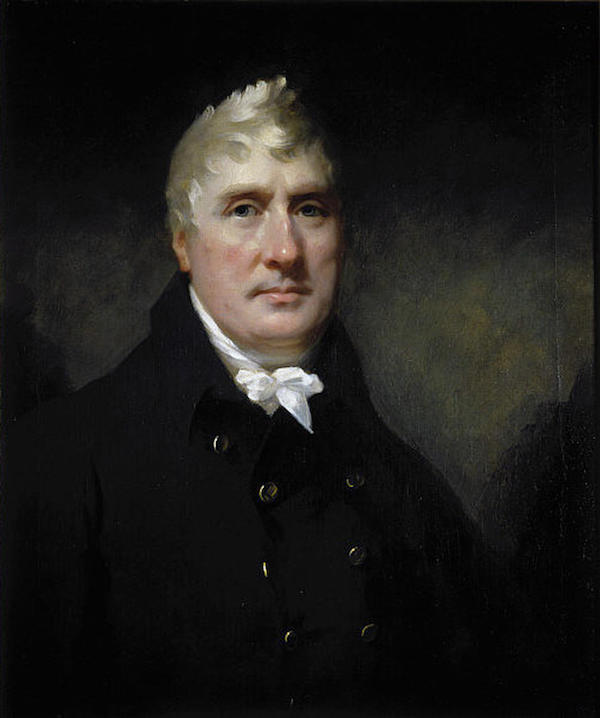 Thomas Telford, who was soon to become the founder and first president of the Institution of Civil Engineers (ICE), used Brown’s idea of bar-linked chains for his Menai Straits Bridge.

The men were in intense competition to produce the longest span, and although the Menai Bridge was started first, Brown’s Union Chain Bridge was the first to be completed.

The Menai Straits Bridge between North Wales and Anglesey opened in 1826 and became world famous; it is even referenced by Lewis Carroll in Through the Looking-Glass, in a chapter called ‘It’s My Own Invention’. The White Knight sings a song to Alice, among whose madcap lyrics are:
“I heard him then, for I had just
Completed my design
To keep the Menai bridge from rust
By boiling it in wine.”
It was also a superb engineering feat that eclipsed the achievement of the Union Chain Bridge and may have led to the men falling out.

However, both Brown and Telford were beaten in the race to install a chain bridge in the United Kingdom. Exuperius Pickering was a Welsh iron manufacturer whose inverted chain suspension bridge was built over the River Dee at Llantysilio near Llangollen in 1817. Pickering needed to transport coal and lime across the river and wanted to avoid the toll at nearby Llangollen Bridge. Pickering’s chain bridge does not carry traffic and has since been repaired and reinforced, but it still has the original 1817 eye-bar linked chains, just like the Union Chain Bridge. 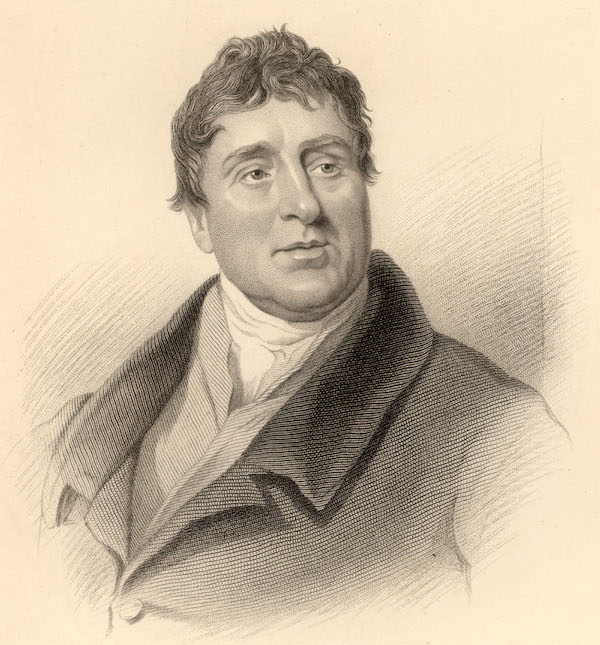