The Union Chain Bridge is locally loved and internationally recognised, with engineers visiting from all over the world to admire and study it.

In 2014, the Friends of the Union Chain Bridge was set up to support the preservation of the Bridge and to conserve, protect and enhance its immediate environment for public benefit. This important group has worked tirelessly to raise funds and awareness of the bridge’s parlous state and campaigned for its conservation after it was threatened with closure. 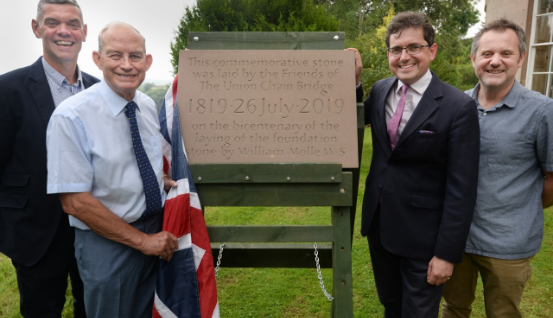 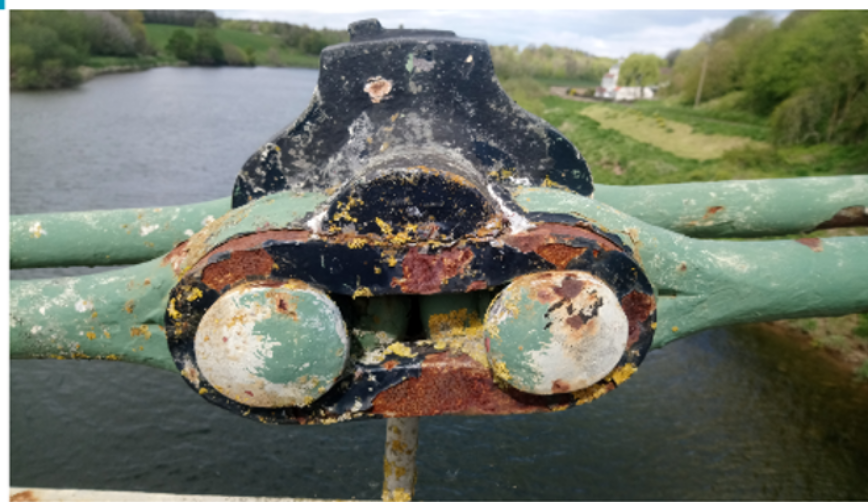 A motion sensor is fitted to the bridge to measure vibrations and wave movement © C.A. Whinnom

In 2019, the project to conserve Union Chain Bridge was awarded significant funding from National Lottery Heritage Fund, to allow a major programme of repairs to the structure.

Union Chain Bridge: Crossing borders, Inspiring Communities is an ambitious project running from 2020 to 2022, which involves the conservation of the internationally significant historic Union Chain Bridge, the preservation of its intangible heritage, and an extensive programme of public engagement. 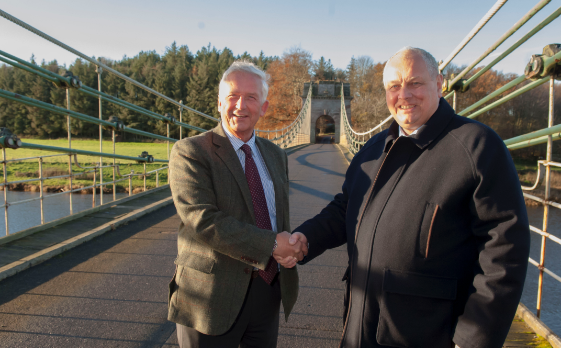 NUSTEM undertaking a pilot learning activity in a school. 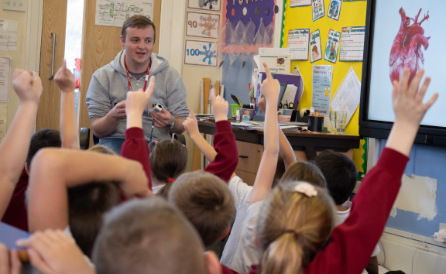 The extensive conservation work due to take place involves: the replacement of chain anchorages; the removal of the 1903 wire rope and hangers; the replacement of failing original hangers and deck timbers; an inspection to determine whether to repair or replace railings and chains as appropriate; stonework repairs and repointing; removal of harmful lead paint; application of a specified paint system; and the reduction in the width of the carriageway to allow for wider pedestrian paths.

The project also aims to forge stronger connections between border communities through the conservation and celebration of the Union Chain Bridge. The ambitious public engagement and learning programme will provide exciting opportunities for people to explore its heritage, stories and setting, raise aspirations in young people, and inspire a new generation of engineers.

Tree clearing near the Union Chain Bridge to prepare for the bridge’s restoration, early 2020. © Alamy 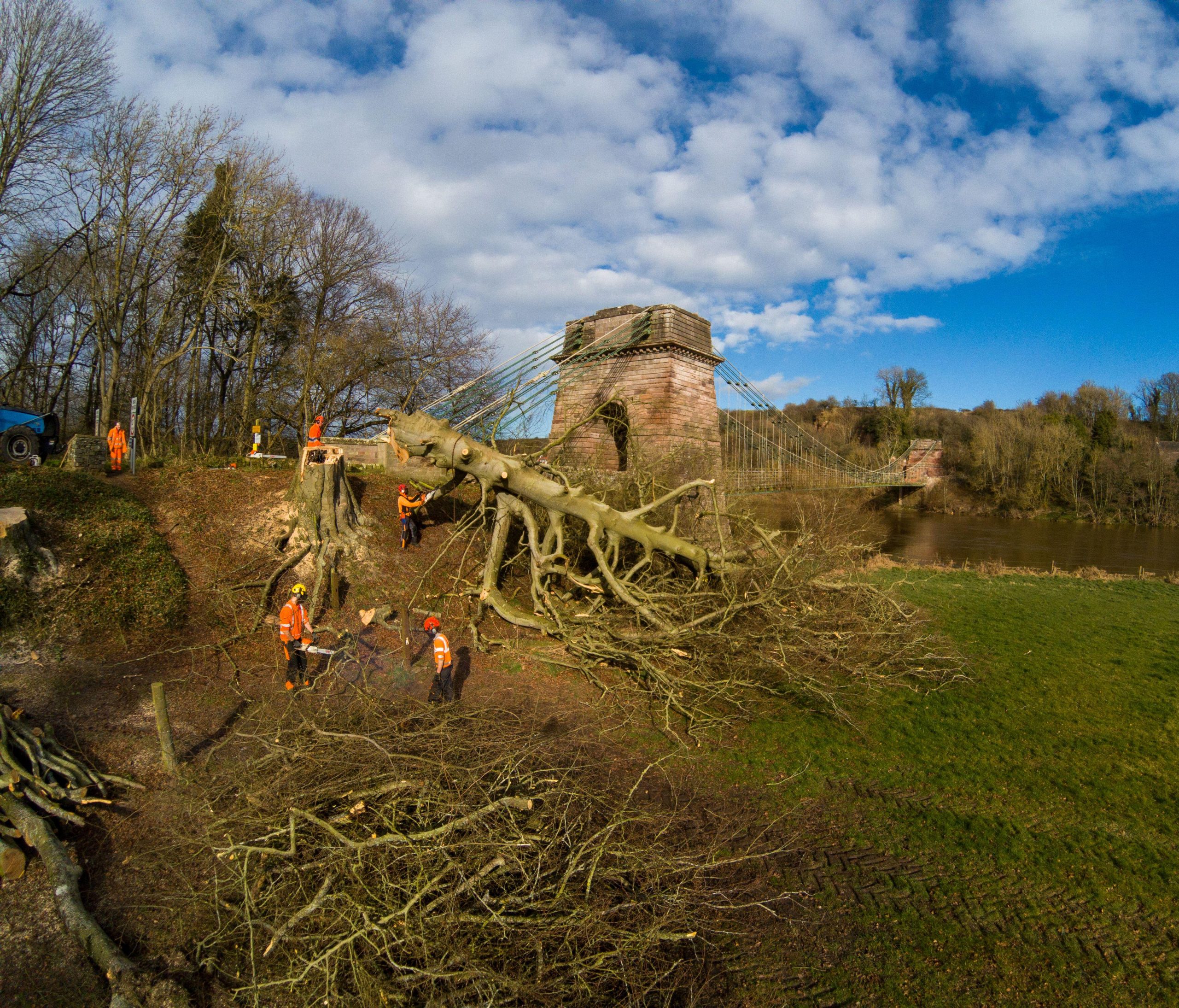 In 1820, the maintenance of Union Chain Bridge was the responsibility of Berwick and North Durham Turnpike Trust, where its costs were covered through tolls for all users of the structure.

However, in 1884, the Tweed Bridges Trust took over ownership and responsibility for the bridge, a marker stone on each side of the bridge commemorates this change in ownership. The trust was responsible for three bridges over the Tweed and inherited the funds from three separate trusts to maintain the bridges. When the trust was dissolved in the 1980s, the bridge became the property and the responsibility of both the Northumberland County Council and Scottish Borders Council, with the responsibility for the management and maintenance of Union Chain Bridge shared by both.

The bridge has undergone repairs and modifications throughout its lifespan, due to general deterioration and change in use over 200 years. Initially, traffic over the bridge was on foot or horse and ox-drawn carts, however, as self-powered steam and petrol vehicles became more prominent, traffic on the structure changed. 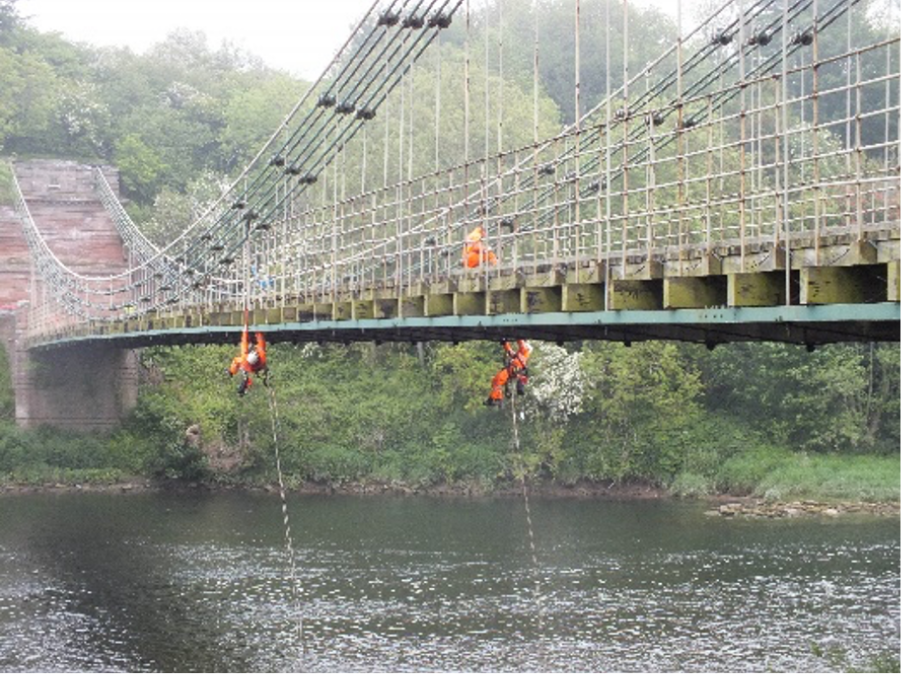 In 1902, the bridge surveyor J. A. Bean concluded that the increase in weight and traffic meant that a weight restriction sign needed to be imposed to restrict vehicles using the structure.

Furthermore, an additional wire rope cable system with associated hangers was installed for strengthening of the bridge due to the increased load by vehicles. However, following the development of the current conservation of the bridge by Northumberland County Council, this wire rope was determined to be redundant, not contributing towards the overall strength of the structure. As the stiffness of this element in comparison to the rigidity of the overall chain system is significantly lower, the wire rope attracts significantly less load. Therefore, the wire rope contributes significantly less to the strength of the structure than envisioned by Bean.

Within this same timeframe, further additions to the deck were implemented, with the installation of deck crossbar supports and bracing rods incorporated between 1902 and 1903. The deck has been replaced several times throughout the lifespan of the structure, as wood doesn’t last as long as metal, especially in the damp environment of a river and the Borders’ climate. The timber deck was replaced in 1871, 1902, 1933 and 1973, with a deck flap added to the English end of the bridge following storms in 1953. Following steelwork replacements in 1973 and suspension chain refurbishments in 1981, it was envisioned a 50-year design life would be achieved, with less intrusive repairs required in the future. However, following further deterioration and several hanger failures since 2006, the proposed works to the structure are required urgently, with Historic England categorising the structure within their “Heritage at Risk Register”.

An information plaque at the Union Chain Bridge © C.A. Whinnom. 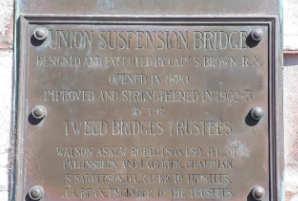 The hangers, cables, and links of the Union Chain Bridge © C.A. Whinnom. 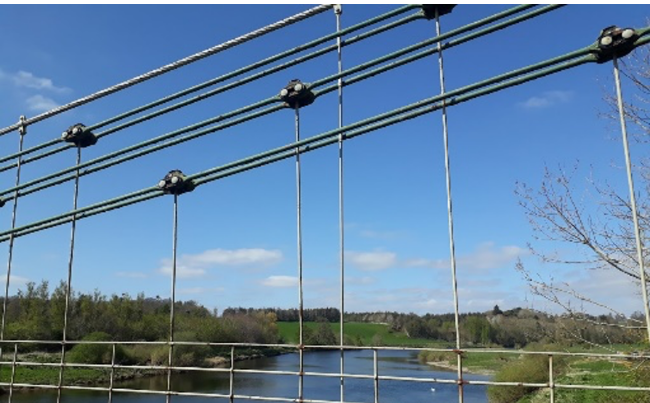 CAN undertaking a survey of the Union Chain Bridge in 2018 © www.can.ltd.uk. 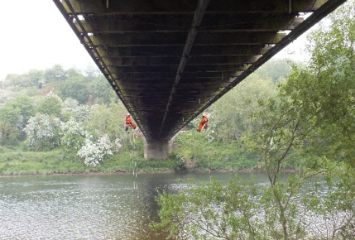